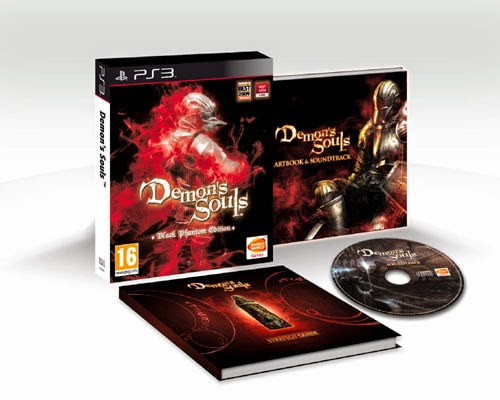 Demon's Souls is a game that developed a cult following before release in Australia which meant that I read a lot about the game before coming to experience it. I got hold of a second hand copy (of the rather nice Australian Black Phantom Edition) back in 2010 and somehow it took me nearly 2 years to fire it up. Despite this I still felt excitement as it loaded for the first time, knowing I'd finally see what all the fuss was about. I'd assumed that the servers would now be offline but discovered they are still online and the ongoing interest in the game means there are no plans to take them offline for some time yet. This was great to hear as the game provides unique mechanisms to interact with other players throughout despite being an ostensibly single player experience.

My first play session was more fun than I've had with a game in some time. I felt the weight of consequence for death straight away. It was immediately tense but also engaging. I'd imagined how the game might feel many times over in my mind but was pleased to find it aligned with the more optimistic of these musings. The game relies on a balance between challenging risk/reward mechanics and concessions to convenience sufficient to motivate replay after failure. The primary currency within the game are 'souls'. Any of these carried upon death are lost, permanently if the player cannot return to their place of death within the level without a further death. The player therefore must view death as a setback with the potential to render all in game experience from their passage of play (which may have been anywhere from 30 seconds to a couple of hours) permanently lost. This confronting design decision should not however be judged in isolation as other aspects of the Demon's Souls overall design philosophy provide a context for this particular design choice. Notably,

It's worth noting that the second of these drivers (generally) doesn't exist in the real world. Take a driving test. You can't simply repeat a driving test until you've clocked up enough hours to receive an automatic pass. A pass is only awarded if you actually execute the test with sufficient skill to satisfy the examiner's minimum standard. Contrast this with most RPG battle encounters. Enemies are ranked in experience just as the player is, and though an enemy of higher levels can be beaten through skillful execution of the mechanics victory can also be achieved by simply gaining an experience ranking (level) that is sufficiently higher than the enemy that victory is assured regardless of how skillfully the player executes the battle. 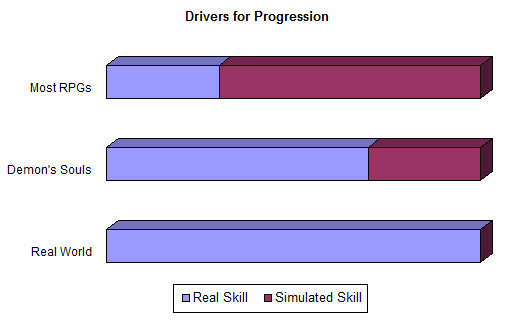 Demon's Souls is somewhere in between. Player skill is emphasized but there is still an underlying RPG experience/leveling mechanic. Your ability to rely on this mechanism and progress through simulated skill alone (grind) is however significantly penalised. A shortfall in execution skill brings about swift player death and with it the loss of any accumulated experience points. The designers have tuned this progression balance so that it becomes essentially impractical to progress without demonstrating a minimum level of execution skill. Having managed to complete levels 1-1, 2-1 (and some of 4-1) I've barely scratched the surface of this game and am unsure of what lies ahead.
Labels: Demon's Souls, design, videogames